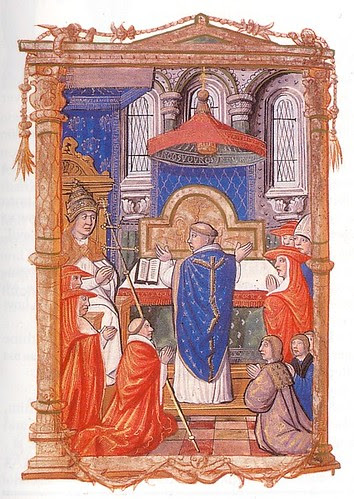 Bodleian, Rawlinson A417, f 37v., originally uploaded by Vitrearum.
The Blessed Sacrament was always reserved in a medieval church, for two reasons. Firstly so that it was always available to be taken to the deathbed of the faithful so that they could be 'houselled' i.e. receive communion (see below). Secondly, as a doctrine of the real presence of Christ in the sacrament developed as the Middle Ages progressed, it was reserved for devotional reasons.

A man being houselled on his deathbed. Fifteenth century glass from Doddiscomsleigh in Devon. Copyright Gordon Plumb.

Generally speaking in England and much of Northern Europe, the usual way of reserving the sacrament was not to place it in a tabernacle on the altar but place it in a box or pyx suspended above the principal altar. The rites of Durham has a wonderful description of the 'hanging pyx' that existed in Durham Cathedral on the eve of the Reformation:

'Over the high altar, did hang a rich and most sumptuous Canapie for the Blessed Sacrament to hang within it, which had two irons fastened in the French Peere (reredos), very finely gilt, which held the canopied over the midst of the High Altar, (that the Pix did hang in it, that it could not move and stir,) whereon did stand a Peliccan, all of silver, ... and a marveilous faire Pix that the holy blessed Sacrament did hange in, which was of most pure fine gold, most curiously wrought with goldsmith worker. And the white cloth that hung over the Pix was of very fine lawne, all embroydered and wrought about with gold and red silke, and four great and round knopes of gold, marvelous and cunningly wrought, with great tassells of gold and redd silke hanginge at them, and at the four corners of the white lawne cloth, and the crooke that hung within the cloth that the pix did hang on, was of gold, and the cords, that did draw it upp and downe, was made of fine white strong silke.'

What a glorious thing it must have been. It probably resembled the hanging pyx that appears in the manuscript illustration above, with a tent-like canopy covering the metal pyx itself. This tent like structure appears quite often in medieval manscripts and it was probably the commonest form of canopy. 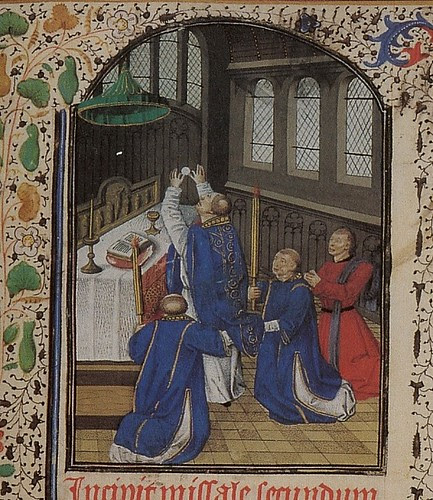 Sometimes a more substantial canopy was provided for the pyx, one is illustrated in the glorious Islip roll produced for Westminster abbey on the eve of the Reformation. The illustration shows the high altar of the abbey during the obsequies of Abbot John Islip in 1532. The pyx is shown suspended from the vast tester that covered the high altar of the abbey. The pyx cloth can be seen peeping below a more substantial canopy in the form of a triple tiara. There is no evidence of a winding gear or cord to allow the pyx to be lowered, so presumably access to the pyx was via the loft that surmounted the altar screen. 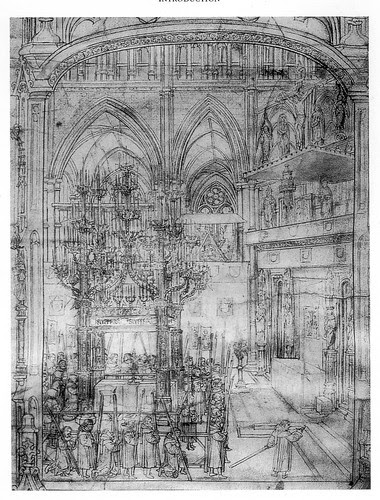 What form did the pyx itself take? They appear to have been of varied form. Often they were a hinged boxes of precious metal. Sometimes they were decorated with enamelled on the outside. Below is an example of such a pyx produced in the thirteenth century in Limoges. 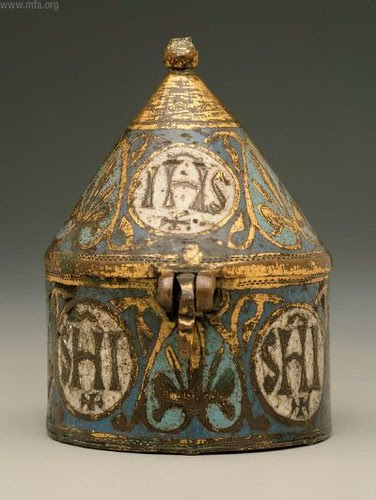 Often in the continent they were produced in the form of birds, commonly doves. 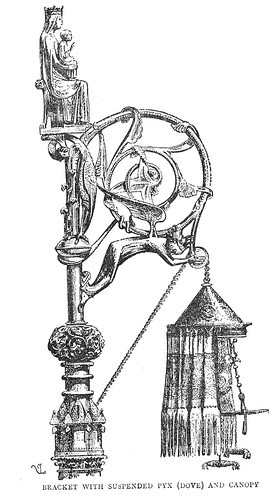 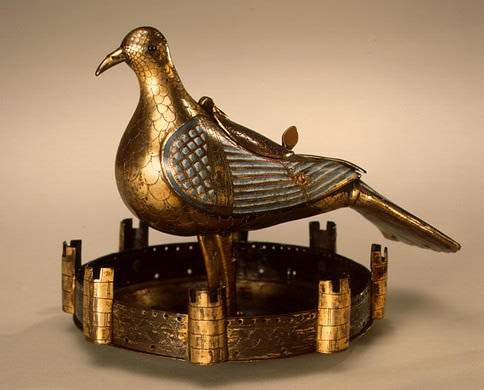 What of the pyx cloths that covered the pyx under its canopy? Well one medieval example survives. It came from Hessett in Suffolk and was discovered in a chest in the nineteenth century. Like the Durham example is of 'fine lawn' i.e. it is made of linen and decorated throughout with drawn thread work. Also in common with the Durham description the cloth is weighted with four balls at the corners decorated with tassels. Unlike the Durham description the balls are made of wood covered with cloth rather than of gold. The top of the Hessett cloth has a hole in it to allow the hanging gear to pass through it from which the pyx was suspended. 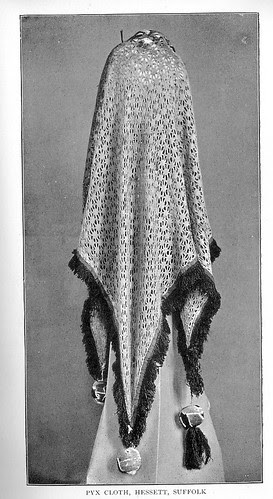